You are here: Home / Explore the city centre / Things to do / Museums and galleries / Public art

Inspirational works of public art have been commissioned around the city centre in key areas as part of completed an ongoing projects such as ‘Art Across the City’ and ‘From the Station to the Sea’.

Here are just some of the works that can be enjoyed in and around the city centre, but keep your eyes peeled as there are many more pieces hidden around the city to appreciate.

There are a number of public art pieces that can be found brightening up the High Street, which is home to creative spaces such as Volcano Theatre and Simpson Galleries as well as social enterprises such as Coastal Housing, creating an ideal environment for art.

There’s a range of pieces; from Peter Fowler’s celebration of Dylan Thomas, for ‘Art Across the City’, opposite the Railway Station, to Pure Evil’s striking mural of Elizabeth Taylor above Volcano Theatre itself, as well as a monument to the artists that came to Swansea for BBC Radio 1’s Big Weekend in 2018.

From the Station to the Sea

An arts-led project created conjointly by Coastal Housing and Volcano Theatre and supported by the Arts Council of Wales, ‘From the Station to the Sea’ aims to produce art inspired by High Street; the surrounding city and its connection to the seaside.

The project has involved theatrical and immersive experiences as well as the installation of long-lasting art pieces, such as Photini Matsi’s vivid shop front.

In addition to the wealth of public art in the area, utility boxes have also been decorated on the High Street. In collaboration with the ‘From the Station to the Sea’ scheme, Swansea College of Arts Students created patterns inspired by the aims of the project, the public voted for their favourite of these eye-catching designs and the winners were installed onto utility boxes on High Street, further brightening the street scene.

Art Across the City

Swansea based global charity LOCWS International has been delivering its ‘Art Across the City’ for 18 years, with over 100 commissioned artworks across Swansea, both temporary and permanent.

Under this project you’ll find; DJ Robert’s neon artwork quoting Dylan Thomas’ radio broadcast ‘Return Journey to Swansea’ on the side of Swansea’s oldest café, The Kardomah, Rik Bennett’s   ‘Terpsichorean Trio’ inspired by the dance halls, pubs and clubs that once thrived on High Street, Bedwyr Williams’ piece ‘Lionheart & Lightsout’ on the Kingsway that commemorates contemporary folklore, Niamh McCann’s skyscape tribute to Dylan Thomas’ ‘Under Milk Wood” can be found at the Dylan Thomas Theatre and possibly the most iconic of these works, Jeremy Deller’s More Poetry is Needed, which can be found in St Mary’s Car Park.

A tropical island scene and a giant kraken are among the works that can be enjoyed around the bars, restaurants and clubs that line Wind Street and the surrounding alleyways.

There is a treasure trove of public art and sculpture to be enjoyed when strolling through the Marina and beyond onto the seafront.

It celebrates Swansea’s history, local legends and the city’s romance with the sea. 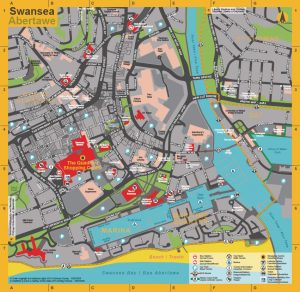